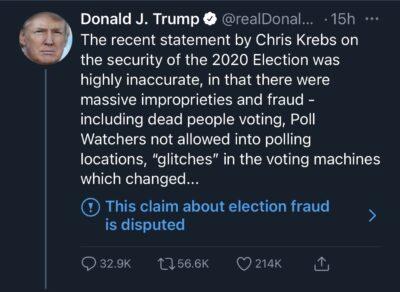 In “news-that-comes-as-a-surprise-to-absolutely-nobody-paying-attention-but-is-still-noteworthy, Chris Krebs (who has been telling anyone that would listen for over a week now that he knows it’s only a matter of time before he is let go), respected Head of the Cybersecurity and Infrastructure Security Agency (CISA), was fired last night around 7 p.m. via a tweet… exactly two weeks to the hour that polls started to close and President Donald Trump started his path to a one-term presidency.

Krebs was fired, essentially, for doing his job and being honest about the election results.

His response to the unceremonious Tweet of Doom almost immediately after Trump posted it does nothing but underscore his competency and professionalism:

Honored to serve. We did it right. Defend Today, Secure Tomrorow. #Protect2020

The president apparently wants there to be widespread voter fraud, the likes of which this nation has never seen. But the truth of the matter is that, according to Krebs and his well-respected agency, “the November 3rd election was the most secure in American history.”

In addition to this highly unpopular announcement, Krebs and CISA launched and then maintained a website earlier this year, entitled “Rumor Control” which sought to debunk the numerous conspiracy theories circulating around the Internet.  Because of the refusal of CISA to kowtow to the pressures of the president, CISA is one of the few federal agencies that has maintained a positive reputation since its creation in 2018, and Krebs himself has managed to conduct himself in a professional manner, mostly keeping above the fray and being well-received by both Republicans and Democrats.

That’s because the safety of this nation should be held above party bickering and bias.  So while it’s unfortunate that Krebs is no longer in charge of CISA, we hope the next person who steps into that role will be able to put party aside and serve the nation, just as Krebs did.