Our Team Of Experts!

We are the “GO-TO” team of certified experts. Petronella Technology Group is more equipped than ever to help with cybersecurity, network cabling and power, Compliance, Blockchain, and Artificial Intelligence (AI). As we have from the start, we strive towards excellence in service and reliability and have served over 2500 customers in 17 years of operation. 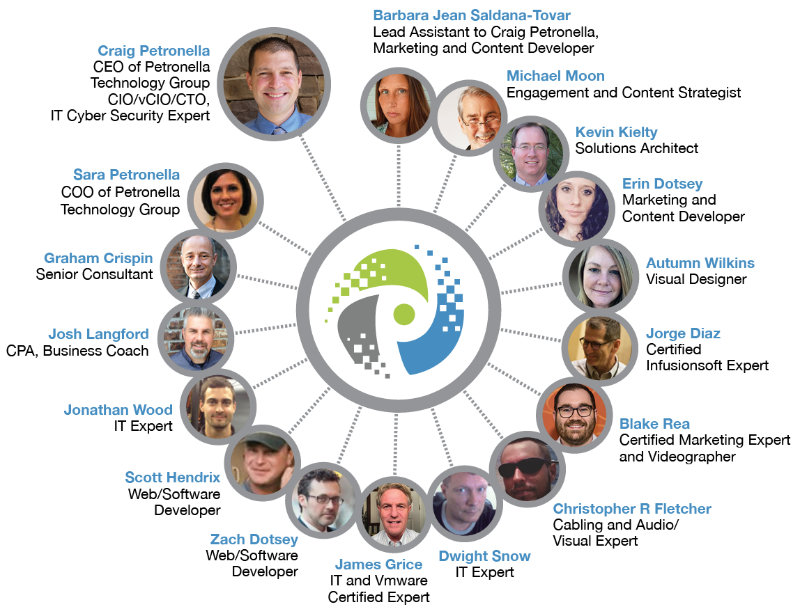 Craig Petronella has spent his 23-year computer career supporting such operating systems as Microsoft, Apple, Linux, Unix, and DOS. In addition, Petronella has supported the small business community with the installation and development of blade servers, fiber optics, iSCSI SANs, and VMware virtualization configurations. He is certified through all seven layers of the OSI model, spanning from network cabling through to the cloud.

It all started in 1985 when Petronella started working in his dad’s office with an 8008 Compaq and a Franklin Computer- the first Apple clone. It didn’t take long for Petronella to make the leap to the Commodore 64 and soon thereafter, his sister’s Dell 386- which he quickly disassembled to figure out how it was configured and how it operated. After seeing him so enthusiastically tackle that project, his parents soon realized his new hobby and purchased an 80386 clone computer. It didn’t take him long to take it apart, reassemble it, and upgrade it- much like he did his sister’s Dell.

In 1989, Petronella jumped head first into the online world by starting his own BBS that ran off DOS, quickly growing to over 300 users- all by using Dad’s fax line. By working with his BBS members and chatting over Internet Relay Chats (IRC), he was able to rapidly grow his knowledge and understanding of all things computers, networks, and software. At 14, he landed a job at i-Data, where he soon would learn how to flash and re-program PLCC chips and printer protocol software with DOS, solder and make customized circuit boards, and upgrade scanners and CB radio equipment.

In 1995, he moved to the Raleigh area from Long Island, New York and entered the computer business as a technician with a local service company.

Before the decade closes, Petronella was hired to help with the Y2K scare. He learned how to build and troubleshoot servers as well as the need for quality structured cabling in business environments. With his ability to grasp new technologies quickly, Craig became Cisco certified and graduated to a network engineer position. He was responsible for managing the entire networks of small towns and cities throughout the North Carolina area.

In 1999, Craig worked for a systems integration firm in Cary, NC. He deployed many cabling, Cisco enterprise wireless, structured wiring, and cabling projects. He was the lead network engineer responsible for all IT Outsourcing tasks for many local governments in North Carolina. Petronella designed and deployed Cisco and Server projects for:

In early 2002, Petronella started Petronella Computer Consultants, Inc., dedicated to providing comprehensive IT outsourcing and managed services to businesses in need of either a completely outsourced IT department or assistance with a specific area of specialization. Our clients value us as a technology partner and a seamless extension of their IT staff. Eventually, Petronella Computer Consultants established a solid reputation of excellent service, growing the firm with satisfied customer referrals. Since the firm's creation, they have performed services ranging from focused technical support to complete system designs.

In 2017, Craig Petronella saw the need to open BlockchainSecurity.com as a subsidiary of Petronella Technology Group, Inc.

As of 2019, Petronella has established himself as a foremost expert on not only cyber security but also all things Compliance - such as HIPAA, NIST, Hitech, and GDPR. He is an Amazon Bestselling Author of books on these subjects, and has formulated a patented "4 Pillars Assessment" that helps businesses assess their risk in a balanced, comprehensive manner. He has become a Subject Matter Expert in Blockchain and Artificial Intelligence (AI), and has contacts all over the world.  Drawing from his international reach, Petronella has defined his career by taking 22 layers of patented security technologies and weaving them together to create his own unique "Unhackable IT-" a complete solution to all cyber threats, including zero-day.

Over the years, Petronella Computer Consultants, Inc. became Petronella Technology Group (PTG). We are more equipped than ever to help with cyber security, network cabling and power, compliance, Blockchain, and AI.  As we have from the start, we strive towards excellence in service and reliability, and have served over 2500 customers in 17 years of operation.