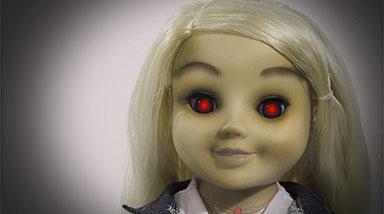 You’ve secured your network. You’ve made sure dangerous phishing emails won’t ever make it into your inbox. Your data is backed up and secure. You know that hackers are always finding new ways to sneak into private information. Even if you do all these things and are aware of the dangers you face, I have some bad news for you. There is simply no way to account for every cyber threat in your organization and home.

There are too many devices connected to the internet. And I’m not just talking about printers and webcams. Hackers could be in your kindergartener’s bedroom right now listening to everything they say and even talking to them.

Want to know how?

The My Friend Cayla doll was a good idea. It’s a doll that connects to an app where it can comment on games the child plays in the app and pick up new conversations. But that’s not all the My Friend Cayla doll does. When the doll is connected to the app, every conversation is sent back to the manufacture (Genesis Toys) which means not only are people listening to what your child says to the doll, but the company can use that information to create ads specifically for your kid.

You might be thinking, “That has to be illegal.” You’re right! Several complaints have been filed due to violations of the Children’s Online Privacy Protection Act. But Genesis Toys has a long terms of agreement contract that not only allows them to record your child, but also to use the recordings for marketing and to change to terms at will without your consent.

But that’s not even the worst part.

Because when Genesis made it possible for the Cayla doll to record and send audio, they opened your child’s bedroom door to hackers. The Cayla doll has barely any security measures, which means a hacker could not only listen to your child talking to the doll they could actually talk back. In fact, the Cayla doll can be hacked using only a mobile phone. That means that someone could be far away and still be able to talk and listen to your child, or whoever is close to the doll. One group of hackers was even able to hack Cayla and make her curse.

And the Cayla doll isn’t the only one.

The i-Que robot is essentially the same toy but has the body of a robot instead of a doll. So you don’t just have to worry about one doll.

And it’s been known that these dolls are not only unethical but dangerous since they first hit the shelves in 2015 and 2014 but people are still buying them. Which is where you come in. If you have children or are buying presents for other children, you might see the Cayla doll and think it’s a good idea. The truth is the Cayla doll is a terrible idea that won’t just expose your child to unethical businesses, but to anyone who can read and has a smartphone.

Like I said at the beginning of this post, there are too many devices connected to the internet for you to be 100% secure. Whether it be the device that wirelessly transfers pictures from your camera to your computer, the doorbell that sends a video feed to you phone, or even your child’s doll, hackers do have a way into your home and business.

If you stay up to date on cybersecurity news and trends, you won’t be one of those poor misguided parents or friends putting a doll that lets anyone talk to a child under the Christmas tree this year.