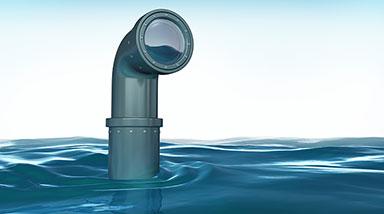 The Secret Service has issued a new warning to the banking industry about a new type of skimming device that has started showing up at ATMs. Being called “periscope skimming,” it involves a connecting a probe directly into an ATM’s circuit board in order to steal bank card data.

The thieves behind the technology were able to perform what’s called a “top hat” entry, meaning that they were able to get access to the internal workings of the ATMs by use of a key. Once inside, they installed two connected devices.

The first device is the periscope that does the actual skimming by stealing cardholder data from the magnetic strip on the back of customer cards. The periscope is connected by a wire to the skimming control device. This second device resembles a small external hard drive and is where the battery is located and the stolen data is stored until the thieves retrieve it.

According to the Secret Service, this particular skimming device is so well hidden that even when the ATM is opened up, the only part that is visible is the one wire leading from the periscope to the skimming control device. So far authorities haven’t found any cameras or other devices used to steal customer PIN numbers, which leads investigators to believe that the periscope skimmers are still just prototypes.