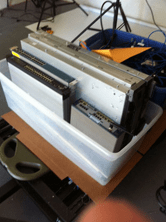 Company President Craig Petronella got a call from one of his biggest managed services customers on the evening of Saturday, April 16, that a tornado had destroyed the customer’s offices. Severe storms ripped through North Carolina earlier that day, when what the National Weather Service called a “family of tornadoes” killed 22 people, injured 130 more statewide and caused damage in seven counties.

Petronella and one of his three full-time techs got together and worked late into Saturday night developing a plan for getting the customer, a military medical equipment supplier in Fayetteville, N.C., back online.

Petronella and tech Mitch Greene left first thing on Sunday morning to drive the 60 miles to the customer’s site from Raleigh, where Petronella Computer Consultants, a managed IT computer network support services company and a Registered Microsoft Partner, has its headquarters and datacenter.

“It was very difficult to get in because the police had blocked off several roads,” Petronella said in a phone interview Wednesday. “It looked like a war zone. There was debris everywhere. Complete houses were destroyed. People with chainsaws were cutting tree limbs to get into their houses. It was just horrible.”

Petronella and Greene arrived at 10 a.m. to meet the owner and a few other employees of the military medical supply company at their wrecked office in a strip mall.

“The glass was all blown out the front, and the place was pretty much deemed uninhabitable,” Petronella said. The medical supply customer’s workers were removing items of value and trying to secure the place.
Petronella
A crate full of Petronella Computer Consultants’ managed servers, ready to leave the customer’s tornado-damaged office and be reconfigured at the MSP’s datacenter. (Source: Craig Petronella)

In a rack next to a concrete wall, the company’s four servers were spared any damage from flying glass or other heavy debris. The group packed up the servers in a crate and pulled them out of the office on a trailer attached to a military Segway, Petronella said.

The next problem was getting the hardware to his car. “We basically had to park in the back and go through a downed fence, downed powerlines and carry the equipment.”

Back in the Raleigh datacenter, Petronella and Greene hooked up the servers. “When we fired up the servers, we thought they were going to catch on fire because there was a bunch of black smoke,” he said.

That would have been recoverable because his company had backups ready for all the machines, Petronella said. Fortunately, the customer’s servers had apparently only inhaled fine debris — the team concluded the servers must have continued to run after the main damage occurred until the power went out.

Petronella and Greene headed home after a 14-hour workday Sunday. Fellow tech Justin Deffenbaugh continued the job of reconfiguring the servers from their former on-premise role to a new hosted environment on Sunday evening, and Dwight Snow finished the work overnight.

By Monday morning, the customer’s servers were online as if nothing had happened, although the military supplier’s workers were accessing the servers from their homes and the company is still looking for a new office.

“They’re really happy” with their computer services, Petronella said of the customer. “They want to write a testimonial.”