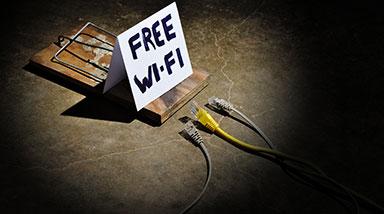 By now people should know not to jump on untrusted Wi-Fi networks, but unfortunately there are a lot of people who either still do it. In order to test this out, security researchers at Avast Software went to the Republican National Convention and set up a series of fake Wi-Fi networks. Despite opening themselves up to the possibility of being hacked and having their personal information stolen, thousands logged on.

Over the course of one day, the team from Avast set up networks and gave them names like “Xfinitywifi”, “GoogleStarbucks”, and “I vote Trump! Free Internet”. More than 1,200 people connected to the fake networks set up around Quicken Loans Arena and the Cleveland airport, of those 70% had their identities exposed. Most of the people using the free internet were using social networking apps like Facebook or Twitter, messaging apps like Facebook Messenger or WhatsApp, and 10% were browsing the web.

Hackers routinely set up these sort of fake Wi-Fi hotspots in order to lure people into jumping on. Once they do, the hacker is able to monitor and intercept any data that is transmitted through it, including web traffic, emails, banking information, or any other personal data that is sent.

Most web traffic sent through a browser is typically not encrypted, but even if a secure protocol is used, it’s fairly easy to get around. With that said, apps like Facebook and many others do use encryption by default so unlike information sent through a mobile browser, it’s likely not sent in plain text.

It’s easy to avoid this sort of data theft by simply not logging on to a network you don’t know. If you for some reason you have to, avoid using a browser and don’t do anything that involves sending sensitive personal information.