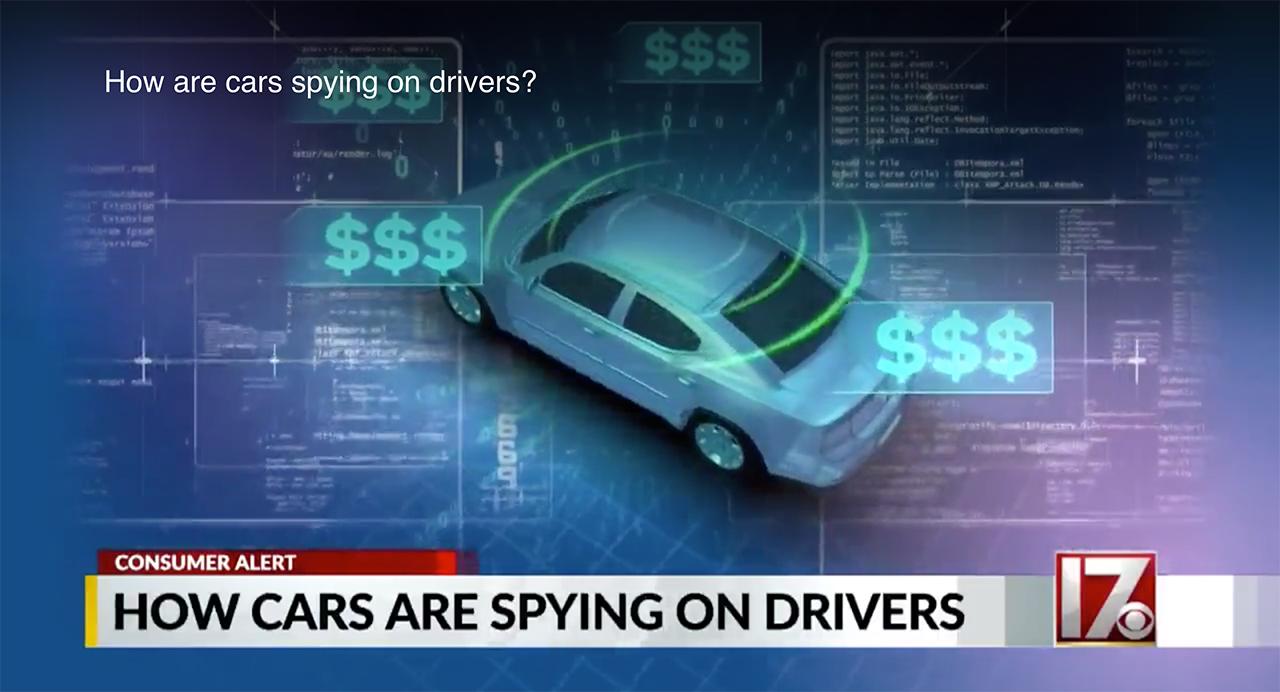 RALEIGH, N.C. (WNCN) — Your car is spying on you and you probably don’t even know it.

Late-model vehicles generate tons of data and automakers are now finding ways to collect and sell that data to third parties — but who really owns that information and should it be sold?

For consumers, it’s creating a tug of war between convenience and privacy.

Since cars were created, they’ve always been something that will take you from one place to another.

But now, automakers are looking at cars like a money machine that will continue to generate profits for years after the initial sale, and most people are unaware of this.

“This is new to me. I didn’t know cars were doing that,” said driver Gantt Folline.

The average driver spends 46 minutes a day in their vehicle and all that time a car’s computers are recording the speed, a daily route, even what time of day the car passes by a Starbucks.

“I did not know that, it’s pretty scary,” said Folline.

Author John Ellis wrote “The Zero Dollar Car” about how the revolution in data collection will change your life. He is the former head of technology for Ford Motor Company.

Under the hood of an automobile, there are multiple electronic devices he says that both generate data and collect data.

He says today’s cars have the power of 20 personal computers — and the data they generate is worth money to car makers.

“With enough data, I can discern patterns that seem to be almost non-existent to the human eye,” Ellis told CBS News.

The worth of car data is growing.

A study by McKinsey and company found that selling vehicle data could generate close to a trillion dollars in revenue by 2030.

“All companies are looking to put their hands into ‘how can we collect as much information about people as possible?’ And how do we monetize it — make money off of it,” said Craig Petronella, a data security expert who is the CEO of Petronella Technology Group in Raleigh.

“I think we should own that data not them,” said driver Chris Cason.

“I think it should be private. I should have the decision rights over what happens with that data,” Ross said.

In some cases, a car owner does own the information.

For example: the data used by mechanics to diagnose problems with a car from the on-board diagnostic port which comes from a vehicle’s event data recorders.

In 2015 Congress passed a law saying data collected from that port belongs to the car owner,  but everything else is fair game.

“There needs to be clear lines drawn,” said Petronella. “Consumers need to sign off and know -— be made aware and educated about what they’re exchanging privacy  for and what they get in exchange.”

General Motors is using that collected data as part of something it calls ‘Marketplace,’ which is an “opt-in” service.

“When you get into your car, after you’ve purchased it, the very first time that you tap the dash, you’d accept other terms and conditions,” GM’s Rick Ruskin told CBS News.  “We’d let you know, in this case, that we may be using the location of your car to serve you.”

What does all that mean?

If you’re low on gas, your car’s computer will point you to the nearest gas station and allow you to pay for it from your dashboard.

The GM Marketplace will also let you order food or make reservations from your vehicle’s infotainment system screen.

And that’s just the start of the digital info revolution.

Some drivers aren’t sure they want to trade that convenience for a loss of privacy.

“Where is that line?,” said driver Nellie DeJong. “I’m a personal rights, personal freedom kind of girl, so I’m always going to lean towards ‘back off a little’.”

And then there’s a question of where does accessing the car’s data result in manipulation of freedom of choice when driving.

“I can see the route being changed based on driving past certain gas stations on purpose or certain merchants on purpose because maybe those merchants paid to get more traffic,” said Petronella.

Connected cars are here to stay and some experts say we might need laws to help us control the data we generate as we go about our private business in our personal vehicles.